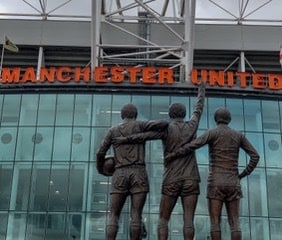 This was the first time in living memory that a Premier League football match was postponed because of a fans’ protest. Not only that, but this was Manchester United v Liverpool – an iconic fixture in the calendar of football fans globally.

Sadly, it made the headlines for all the wrong reasons and two Police Officers were injured, one seriously.

“They haven’t communicated with us for 16 years”

One of the comments from supporters who invaded the pitch having entered the stadium before the game was that “They haven’t communicated with us for 16 years”. “They” being a reference to the Glazer family from the USA who bought the club via a leveraged buyout which put the club into debt for a reported £790 million.

The “lack of communication” comment made me think about Internal Communications – and the (apparent / obvious) lack of it which allegedly didn’t take place for 16 years.

“Who is your audience” is a key plank of just about every Media Training, Internal Communications, or Media Awareness course we have ever given.

Clearly the fans are not just a key audience, but are key stakeholders.

The European Super League debacle was an absolute case in point. There was literally no consultation with UK football authorities, or the fans. The result was chaos and disaster – with apology after apology, climbdown after climbdown and the resignation of the Chief Executive of Manchester United, Ed Woodward.

So, how could Internal Communications have helped?

Just about the only people football fans trust at their football club are a) the players and b) the manager – sometimes.

Sir Alex Ferguson was the manager of Manchester United for 26 years – unheard of today in the top flight. He was in charge when the Glazers took over and he understood the importance of Internal Comms. He never ever publicly criticised the Glazers. He always spoke of the money they made available to him to buy players. There were no fans’ protests – at least not on this scale – while he was in charge.

Fast forward to today. The scenes were truly shocking. The pictures were worth a thousand words. Even some of the club’s own fans were shocked at what happened and the resulting postponement of a key Premier League football match .

You will never please all the people all the time. And football fans are incredibly hard to please. But a better and clearer understanding of the benefits and need for clearer communication is surely the lesson here.

The stakes are incredibly high. The Glazers have placed a £4 BILLION valuation on the football club. How much damage has this protest done to that valuation now – compounded with the PR disaster that was the European Super League?

Our view is that lack of communication, lack of an effective Internal Communications Plan or Strategy has literally cost the club hundreds of millions, if not a billion pounds.

Communication is a financial necessity today. If you don’t communicate properly, you put your balance sheet in jeopardy.

Andrew Carapiet is a Director of Media Friendly, one of the UK’s leading Media Training and Communications consultancies www.mediafriendly.org. Please contact us on 01628-474154 or email us at enquiries@mediafriendly.org.

Photo by Dan Parker on Unsplash

The UK has become the first country in the world to approve a COVID-19 antiviral - @MSDintheUK's #molnupiravir.

Great news from the @MHRAgovuk which will benefit the country's most vulnerable - we're now working at pace to deploy it to patients.

The stage is set for a great day of talks from across the housing sector at the 2021 Housing Forum National Conference. If you're attending in person or virtually, join the conversation with the hashtag #FitForTheFutureHousing